Only the most recent in an increasing string of highly destructive events, Hurricane Ian brought now familiar scenes of upended buildings and electrical outages that are now familiar, but also an aerial perspective of pollution turning Florida waterways and the Gulf of Mexico a shade of “root beer.” This mix of sewage, fertilizer, fuel runoff, and more is just one flavor of the “toxic soup” such storms concoct. Chemicals dislodged from the industries that concentrate in waterfronts and low lying areas don’t just flow to waterways but poison relief workers and settle in nearby homes and soils. The resilience of industries large and small has great consequences for disaster preparedness and environmental justice. 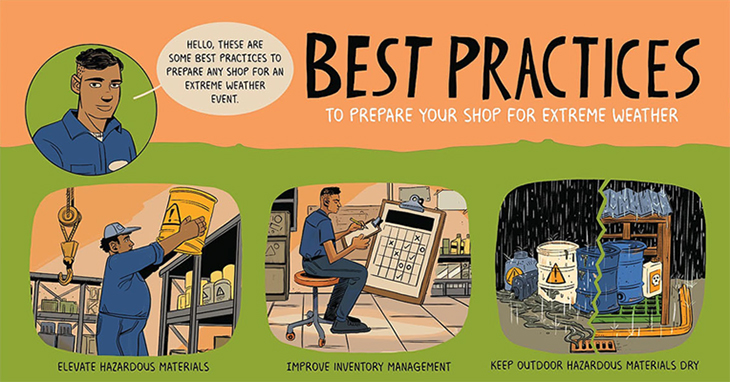 . . .
They soon realized that business owners and workers may not have the information themselves and did not have the time to take stock of their chemicals, or the ability to allow scientists into their shops during long working hours. The research team ultimately relied on photographs and public information about chemicals they knew to be present based on the images and site visits. Covid-19 also complicated matters for the researchers and for the businesses, whose financial precarity was exacerbated by the pandemic.
. . .
Malik Ashraf, the owner, has operated this shop since 2019. He describes how UPROSE helped him “understand in terms of the environmental impact of the shop, which I never knew before . . . Besides that, they really helped me out to implement some of the methods.” UPROSE volunteers approached Ashraf in person, at his shop. After hearing about the potential impacts of chemical release during storms, he now stores certain chemicals up and away from the floor in cabinets and storage lockers. This modest change reflects his new knowledge, and new awareness of community health and safety.
. . .
Read much more about this issue at Urban Omnibus,
a publication of  The Architectural League of New York =>