Amsterdam Is Embracing a Radical New Economic Theory to Help Save the Environment. Could It Also Replace Capitalism?

///////
It’s the first time a major city has attempted to put doughnut theory into action on a local level, but Amsterdam is not alone. Raworth says DEAL has received an avalanche of requests from municipal leaders and others seeking to build more RESILIENT societies in the aftermath of COVID-19.
///////
Almost two decades after she left university, as the world was reeling from the 2008 financial crash, Raworth struck upon an alternative to the economics she had been taught. She had gone to work in the charity sector and in 2010, sitting in the open-plan office of the antipoverty nonprofit Oxfam in Oxford, she came across a diagram. A group of scientists studying the conditions that make life on earth possible had identified nine “planetary boundaries” that would threaten humans’ ability to survive if crossed, like the acidification of the oceans. Inside these boundaries, a circle colored in green showed the safe place for humans.

But if there’s an ecological overshoot for the planet, she thought, there’s also the opposite: shortfalls creating deprivation for humanity. “Kids not in school, not getting decent health care, people facing famine in the Sahel,” she says. “And so I drew a circle within their circle, and it looked like a doughnut.” 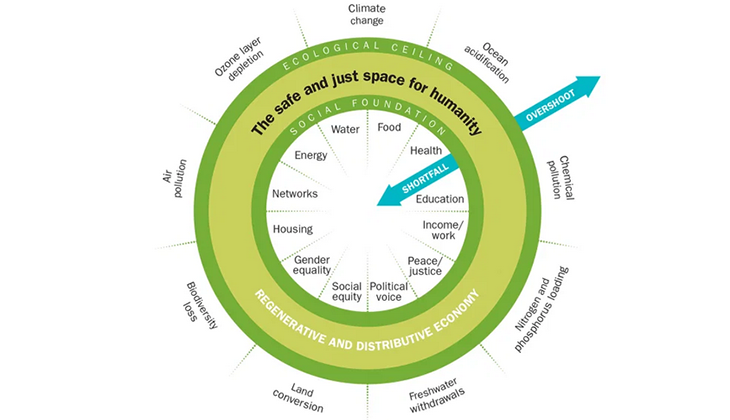 ///////
In July, Raworth’s DEAL group published the methodology it used to produce the “city portrait” that is guiding Amsterdam’s embrace of the doughnut, making it available for any local government to use. “This is the crisis,” she says. “We’ve made sure our ideas are lying around.”

This appears [as a coplete article] in the February 1, 2021 issue of TIME.