A Safe and Just Space for Humanity

is a visual framework for sustainable development – shaped like a doughnut – combining the concept of planetary boundaries with the complementary concept of social boundaries. The framework was proposed to regard the performance of an economy by the extent to which the needs of people are met without overshooting Earth’s ecological ceiling.[2] The name derives from the shape of the diagram, i.e. a disc with a hole in the middle. The centre hole of the model depicts the proportion of people that lack access to life’s essentials (healthcare, education, equity and so on) while the crust represents the ecological ceilings (planetary boundaries) that life depends on and must not be overshot.

Consequently, an economy is considered prosperous when all twelve social foundations are met without overshooting any of the nine ecological ceilings. This situation is represented by the area between the two rings, namely the safe and just space for humanity. The diagram was developed by Oxford economist Kate Raworth in the Oxfam paper A Safe and Just Space for Humanity [https://www.oxfam.org/en/research/safe-and-just-space-humanity] and elaborated upon in her book Doughnut Economics: Seven Ways to Think Like a 21st-Century Economist. [Book is available for free as an audio book on Amazon] 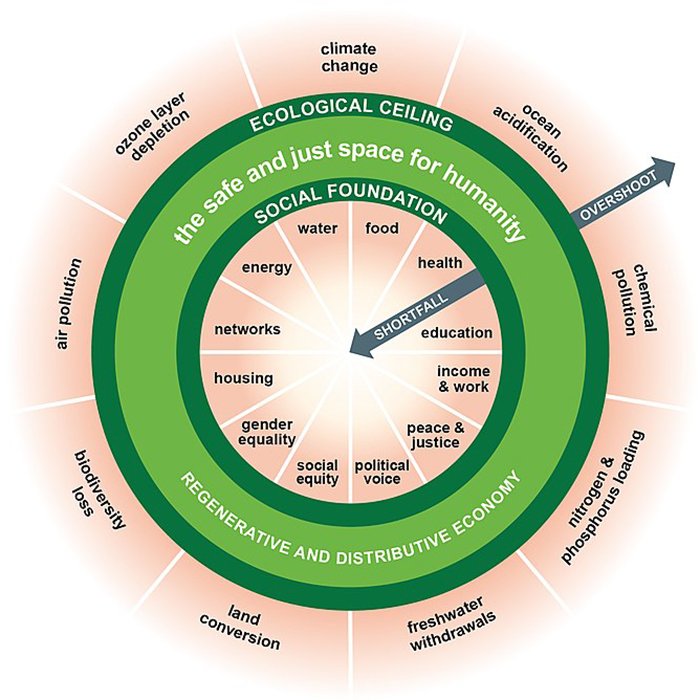 Instead of focusing on the growth of the economy, Kate Raworth focuses on a model where there can be ensured that everyone on earth has access to their basic needs, such as adequate food and education, while not limiting opportunities for future generations by protecting our ecosystem.