Map of Canada shows what each province thinks of climate change

A recent study by Yale University is really showing the divide between Canadians who believe that climate change is a real thing, and those who are in climate change denial.

The Canadian Climate Opinion Maps 2018, from Yale’s Climate Change Communication program, presents visual representations of data sourced from across the country. The series of eight maps show the disparity of sentiments about climate change from coast to coast and political riding to political riding. 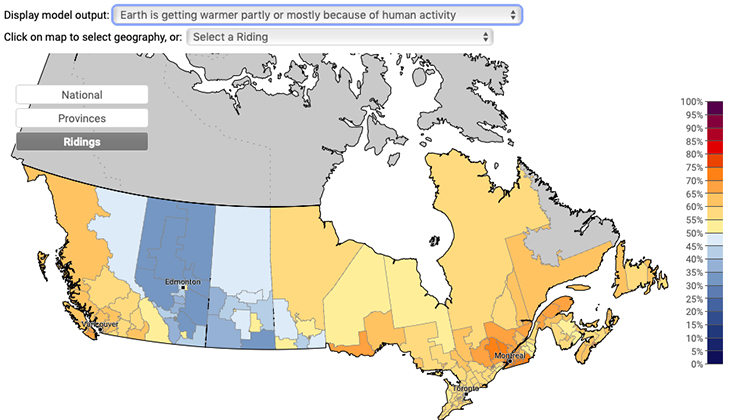 Unsurprisingly, most people in virtually all of Alberta and Saskatchewan — leaders of the movement to separate from the rest of Canada after the recent federal election — along with parts of Manitoba and B.C. do not think that the earth is getting warmer partly or mostly because of human activity.

In contrast, the western portion of B.C., most of Manitoba, and all of Ontario, Quebec, and the Maritimes are coloured various shades of orange on the same map, indicating higher percentages of adults in these places (at least more than half) who believe that yes, the earth is heating because of our habits.

But, 100 per cent of the country as surveyed at least agrees that the earth is heating up, regardless of the cause. Data was unavailable for residents of Labrador and the three territories.