Scientists have gotten predictions of global warming right since the 1970s

There are dozens of disciplines and subdisciplines within the broad ambit of climate science, studying everything from ancient geology to the spread of disease. But one discipline in particular is exposed to intense public scrutiny, the subject of long-running political and legal disputes: modeling.

As interesting as the details of climate science may be, what society most needs from it is an answer to a simple question: What the hell is going to happen? What are we in for? That’s the question models seek to answer.

It turns out that attempting to understand, model, and predict the entire global biophysical/atmospheric system is complicated. It’s especially tricky because there’s no way to run tests. There’s no second Earth to use as an experimental control group. The best scientists can do is use their knowledge of climate history and climate physics to build models of Earth systems and then test the models against future emission scenarios.

This reliance on models has always been a bête noire for climate change deniers, who have questioned their accuracy as a way of casting doubt on their dire projections. For years, it has been a running battle between scientists and their critics, with the former rallying to defend one dataset and model after another. (The invaluable site Skeptical Science has a page devoted to attacks on modeling, with links to further reading.)

Now, for the first time, a group of scientists — Zeke Hausfather of UC Berkeley, Henri Drake and Tristan Abbott of MIT, and Gavin Schmidt of the NASA Goddard Institute for Space Studies — has done a systematic review of climate models,  dating back to the late 1970s. Published in Geophysical Research Letters, it tests model performance against a simple metric: how well they predicted global mean surface temperature (GMST) through 2017, when the latest observational data is available.

Long story short: “We find that climate models published over the past five decades were generally quite accurate in predicting global warming in the years after publication.” 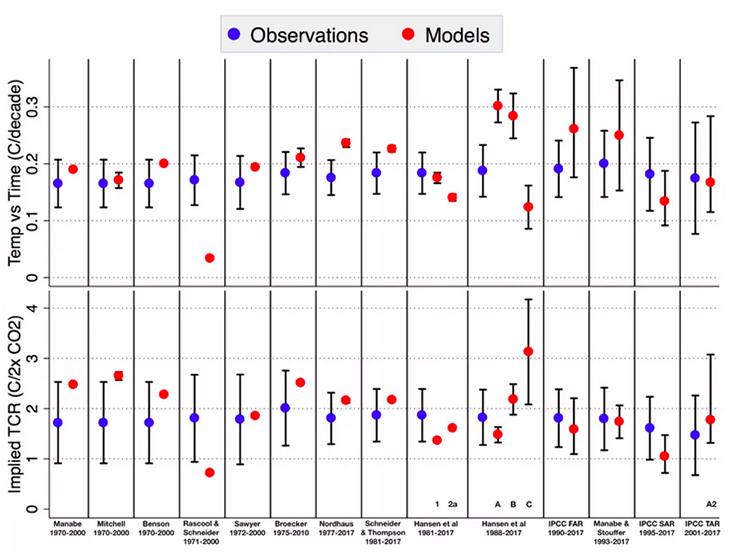 This is contrary to deniers, who claim that models overestimate warming, and contrary to the bizarre op-ed the New York Times, ran in November, which claimed that scientists underestimate warming. As it happens, models have roughly hit the mark all along. It’s just, nobody listened.

Rest of this very informative text